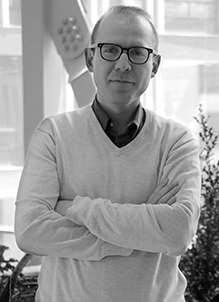 Erick Behar was born in Bogotá in 1986, after which he was raised between the United States and Colombia. Erick studied Economics and Social Sciences at the Ruhr Universität Bochum in Germany. He then did his master studies in Augsburg (M.Sc. in German French Management) and in Rennes, France (Master in International Management). He earned his Ph.D. at the Ludwig Maximilians Universität München in the area of applied cyber anthropology, studying applicant attraction and organizations from an interdisciplinary perspective. Erick has worked as a manager in the food industry and trade sector in Europe, with experience in SMEs and in conglomerates such as EDEKA Gruppe. Erick was appointed Dean of Economics and Business at the Central University of Colombia, after having served as Undersecretary of Economic Development and Competitiveness Director of Bogotá. His teaching experience covers the areas of international business, branding, applied cyber anthropology to business and politics, macroeconomics and web metrics at institutions such as CESA Business School, Central, and Externado universities. He is passionate about coffee and agriculture, having cofounded a startup in Colombia in the honey and fruit business, among other entrepreneurial projects in other sectors. Erick is a frequent contributor to the renowned magazine Revista Dinero in Latin America, covering topics such as idiosyncrasy, business, and branding. Erick speaks and writes 8 languages. He is the author and editor of several books and articles related to international business and applied cyber anthropology, as well as a soon to be published novel about Latin American legalism.