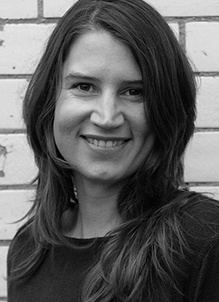 Katrin Brünjes studied architecture at the Bauhaus University in Weimar and the ETSA Valladolid in Spain. From 2000 she worked for Prof. Hans Kollhoff Architekten in Berlin and moved in 2002 to the Netherlands to lead the project ‘Brainpark III’ in Rotterdam. For David Chipperfield Architects she moved in 2006 to London to work on various projects. From design to construction documents she was in charge of the museum extension of the Penn State University Museum in Pennsylvania, USA, the master plan ‘Ban de Gasperich’ in Luxembourg and the housing project ‘Cottage Place’ in London Kensington. In 2009 she founded her Studio in Berlin and has worked since 2014 in partnership with Christoph Tyrra as BrünjesTyrra Architekten. Alongside her practice she has been teaching initially at the Technische Universität Berlin and then at the Brandenburgisch Technischen Universität Cottbus-Senftenberg in the Bachelor and Masters program. Since 2018 she has been teaching Interior Design at the Berlin International University of Applied Science.